The old Chevelle I began learning to drive as a teen had a three-speed manual transmission.  The shifting lever was on the steering column, and the pattern was in an H-shape with reverse at the near-top, first gear at the near-bottom, then second gear up at the far-top, and (finally!) third gear down at the far-bottom.

That’s known as a “Three on the Tree” column shifter.

As a kid just learning to drive, the manual transmission was hard enough to master without requiring my attention be drawn to the steering column as I aimed that screaming rocket sled down the road, trying to avoid hitting other cars, animals, people, buildings, rivers, and so on.  Coordinating the steering wheel with my left hand, the shifter with my right, and THREE pedals with just my two feet, made safe driving (and dodging rollers) a difficult task, indeed!

For many people, the problems with Three on the Tree didn’t stop when they ascended to the top of the learning curve.  For instance, my wife, being vertically challenged, found it necessary to use the wide bench in my 1974 Dodge pickup as more of a rest to lean against, rather than a seat to sit upon, while she worked the pedals and column shifter.  It gave her the appearance of standing in the cab, turning heads around town as she trucked home the groceries.

Whatever the problems were for the column shifter, those of us who mastered them, and the cars & trucks they worked, came to love them.  Many of us remember them fondly as our “Three on the Tree” cars of yesteryear, and the association of the words “tree” and “column” are forever joined in our linguistic “Memorex” tapes.

So, maybe you’ll forgive me for wandering down Memory Lane as I begin the discussion of the Geologic Column, a well-known placeholder in the discipline of Geology.  It’s also a common method of dating fossils.

Here’s the trouble:  Among many, many fatal problems with using the “Geologic Column” as a dating method, there’s one that cannot be ignored or explained away in a convincing manner:  There’s a tree in that column.

Actually, there are many trees in there.

The Geologic Column says that the surface of the Earth is overlain by sedimentary layers that correspond to geologic ages.  Like floors in a high-rise building, each level is distinct from the rest.  The ages are represented in the column by differently colored horizontal layers.  At the top of the column is the youngest layer, and the ages advance as you count down through the layers. 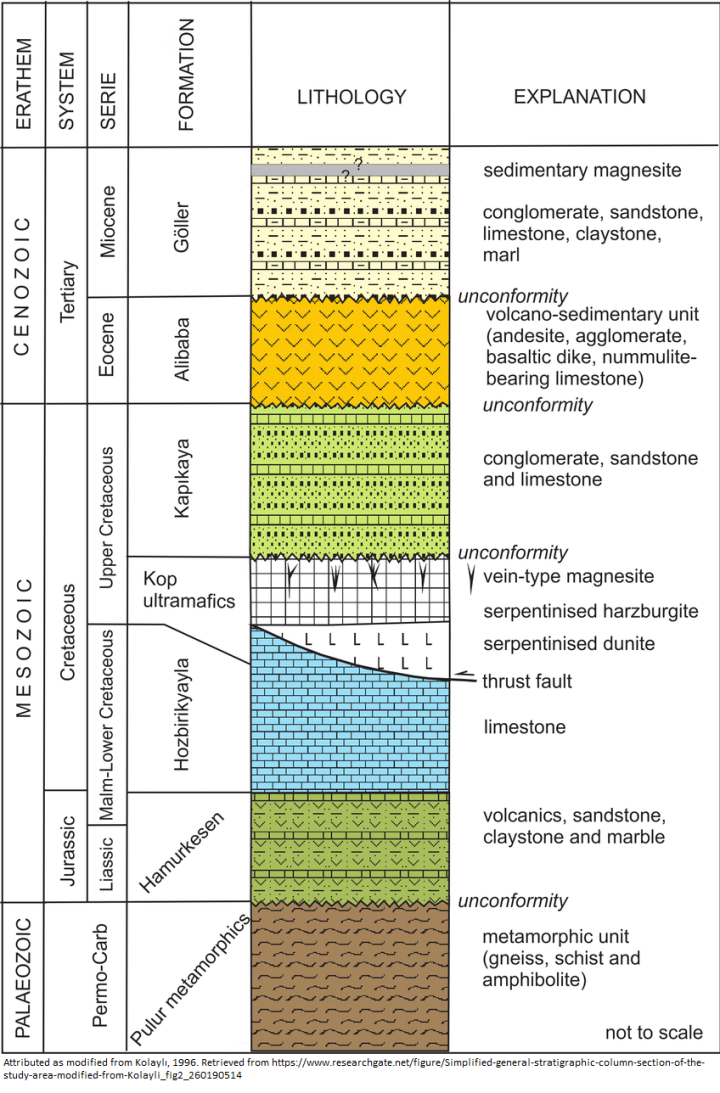 Local variations of the column (or exceptions to it, depending on numerous factors) can be seen as you drive along the interstate and count discrete layers in the walls of hills that were blasted to put the road through.

The idea, then, is that, for each geologic age, there were varying materials laid down over the many thousands of years, or many millions of years, that that geologic age persisted.  Then, something happened, and a new and different type of material began to be laid down for many more millions of years, forming a different layer.  After mineralization cemented the layers into sedimentary rock, those layers were hardened into the ever-growing Geologic Column, while newer layers continued to be overlaid above.

Sounds pretty good.  Looks great in the textbooks.  Sounds really smart while geologists pontificate to students during field trips to the Grand Canyon.  In practical application, however, the Geologic Column, as it’s represented, exists almost nowhere on the Earth.

In nearly all the explored Earth, huge chunks of the column are missing entirely.  Often, layers are flopped, missing, and flopped again, with layers of varying ages intermixed in a non-uniform manner.  In adjacent horizontal layers, fossil forms are found that should not occur together in the same geologic layer.

And there are those darned out-of-place artifacts!

A golden necklace in mineralized, multi-million-year-old strata; a fossilized fedora hat; iron tools in ancient coal beds; a fossilized modern shoe print containing the remains of a creature extinct for more than 200 million years.  The list of anomalies is anything but mysterious, and not at all rare.  They occur all over the globe, and they’ve been documented for hundreds of years… before the Geologic Column was ever elucidated! 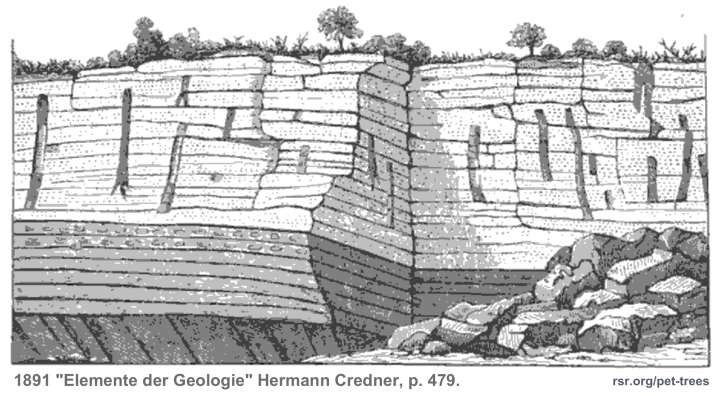 I’ve relayed, in Installment #1, that radiometric dating methods are inadmissible as true scientific evidence.  Here, I’m telling you that radiometric dating’s sidekick, the Geo Column, is every bit as much a fraud when it comes to dating fossils and artifacts.  And, here’s the kicker:  There are trees that occur vertically among what are supposed to be millions of years of horizontal strata.

Polystrate fossils (called that because they penetrate multiple layers of the strata) are often classed as rarities; explained away as having been deposited only in very small and local sedimentation events, like a small local flood.

Interesting.  The Geologist who champions a column of strata as having been laid down, layer by discrete layer, over hundreds of millions of years by forces and conditions that are not seen to occur anywhere on the Earth then switches processes to use “small, local sedimentation events” in explaining areas where vertical artifacts ruin the very millions of years of layering he/she is trying to explain by gradualism.

Does anybody see the problem?

Geologists committed to an old Earth, and having attended grad school, the bastion of dogmatic pop-science, are then so entirely immersed in the dogma that they cannot see the trees for the column.

There are trees in the column.

So, then, wherever you find a tree trunk penetrating many millions of years of strata, and you hear someone say to the effect, “That means this formation is merely the result of a local depositional event that included the tree,” ask that person whether the formation has always been considered a “local event” or if it was tagged as such after the polystrate tree was discovered.

Finally, if you’re a student (at any level of our education system) ask your teacher/professor why nearly all areas of the geologically explored Earth show us depositional sedimentary layers that do not correspond to the textbook Geologic Column.

I said at the outset “That the flood occurred evokes measures of mirth in a good many of you… (you think) it’s a fictional story included in the book of Genesis to give us religious messages.”  And, I said “I believe the Genesis account of the global flood is not only true, but it provides accurate information that can unlock vast measures of scientific insight as to how and why the Earth looks & behaves as it does.”

Just step back; look at any layered depositional feature, from Grand Canyon to the cuts in your local roadbeds, and ask yourself, “Was this feature more likely to have been laid down over hundreds of millions of years, with each discrete layer being comprised of a mostly singular material for the millions of years that each layer persisted, only to be suddenly switched for a different depositional material, again and again and again as the layers go up?

Or, is it more likely that a flood event sorted the sediment by type, laid the sediment down in horizontal layers with a cementing agent, and the formation hardened into distinct rock layers that sometimes includes trees in a vertical orientation?

Ask yourself, “Which of those two scenarios is actually seen to occur on the Earth, and which one has never been observed to occur?”

Folks, radiometric dating methods and the Geologic column, when either is used to date rocks, fossils, and artifacts, fail utterly the test of true scientific inquiry.  The evidence for either process being accurate is quite poor, and it would be unacceptable if offered under any milieu other than to support old-Earth uniformitarian theories.

This has been a very general outline of the topic.  The evidence against the dependability of the Geologic Column, and against radiometric dating methods, is staggering in volume and outstrips a short essay like this one.  But, if you’d like a detailed, single-source example from actual events that shows how they are each flawed, and how they are often used (in a circular fashion) to “prove” each other, read the Appendix of Marvin L. Lubenow’s Bones of Contention (Baker Books, 1992) beginning on page 247.  Laymen will benefit from such a lesson, and the accomplished scientist will be quite shocked at the house of cards passed off as evidence by pop-geology and pop-paleontology.

I’ve also said that this series is about the global flood that is presented in the book of Genesis.  But, I’ve yet to write anything on the subject.  Why not?  Very simply, I thought it was important to lay down these points before I began.  I’ve done this because for your entire life the idea of an old Earth has come at you, unopposed and unquestioned, through education, the arts, and pop culture.  It’s everywhere, and everywhere presented as fact.  Actually, it’s just a theory, and a very bad one at that.

So ingrained is this (very bad) theory of the old Earth that barely anyone questions it.  Well, my point has been to introduce to you the idea that the two most-reliable and most-often used methods of dating material in geology and paleontology are flawed (exceedingly flawed) and there is very little else to support the theory of an old Earth.  You should not take the ages presented by pop science and their two dating methods as true.  Again, they’re flawed.  Very flawed.

We have no good reason to think the Earth is millions or billions of years old.

But, there’s lots of evidence that supports a young Earth.  I’ll begin unpacking that evidence by quoting from the Bible, the Book of Genesis, beginning in the seventh chapter and the eleventh verse,

“In the six hundredth year of Noah’s life, on the seventeenth day of the second month – on that day all the springs of the great deep burst forth, and the floodgates of the heavens were opened.”

This isn’t a fairy tale, folks.  It’s history.  And, science, true science unfettered by old-Earth dogma, backs up the observations recorded in Genesis, and supports the theories for how the flood changed our young Earth.